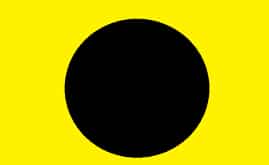 How the Black Ball Flag drove the Beater Surfboards Origin!

In the early 1960s, surfing was becoming all the rage on crowded Southern California beaches.  Huge, heavy longboard surfboards with ten plus inch sharp fins were the wave riding vehicle of choice.  If a rider wiped out and a board hits a swimmer or wader, it can cause serious injury or even death.  A rash of injuries and confrontations led to the Beach Town Councils to get involved.  Towns like Newport Beach and Beaches of Orange County simply banned surfing during the warm months.  In some cases, surfers were crowded into less than prime wave break “surf only” areas.  Surfers, generally a disorganized Bohemian crowd, began to resist.  Small surfing organizations formed and urged a compromise to the draconian surfing restrictions and total bans.

Most of the Southern California Beach Towns have Lifeguards on duty during the crowded peak season.  Many Councils agreed to allow surfing if approved by the on-duty Lifeguard when there were safe conditions on the better surf beaches.  These would generally be, early morning, late in the day or bad weather days, when swimmers and bathers were few.  To signal a No Surfing condition a large yellow flag with a big black dot, or Black Ball was flown from the Lifeguard Stand.  When the flag was up, only swimmers, bathers, and soft, finless bodyboards were allowed in the water.  The Lifeguard’s decisions were final, if he put up the flag, surfing ended.

Still, frustrated by some of the best beach breaks being restricted by the dreaded Black Ball Flag, surfers came up with a plan.  They designed larger. lightweight soft bodyboards.  These were finless boards but sill large and floaty enough to standup surf.  When presented to the Lifeguards, most of whom were surfers, they were generally accepted if they were under 5 feet in length and no fins.  These were to become the first of what we now call the beater boards.

Since the advent of the first, now commonly called, beater boards, there have been steady developments and substantial improvements.  Today’s beater surfboard generally has removable fins so they can quickly transition when the Black Ball Flag comes down.  Many more sizes shapes and styles of these beater soft top surfboards are now seen on beaches, behind wake surf boats and standing waves on river rapids worldwide.  Stronger and lighter materials are now in use that makes these beater soft boards all the rage with beginners and even professional surfers. Now you have a short history of the beater surfboards origin.

Black Ball Beater board sizes and their expanded width make them perfect surfboards for kids.